BE THOU MY VISION

Be Thou my vision, oh Lord of my heart
Nought be all else to me, save that Thou art
Thou my best thought in the day and the night
Waking or sleeping, Thy presence, my light

Be Thou my wisdom, be Thou my true word
I ever with thee, and Thou with me Lord
Thou my great Father and I, Thy true son
Thou in me dwelling, and I with Thee one

Be Thou my breastplate, my sword for the fight
Be Thou my armor and be Thou my might
Thou my soul shelter, and Thy my high tower
Raise Thou me heavenwards, oh power of my power

Riches I need not, nor man's empty praise
Thou my inheritance all of my days
Thou and Thou only, Thou first in my heart
High King of heaven, my treasure Thou art

Oh high King of heaven, when battle is done
Grant heaven's joy to me, bright heaven's sun
Christ of my own heart, whatever befall
Still be my vision, Thou ruler of all

Posted by Chiew Kin Yan Darryn at 4:00 AM No comments:

On 28th May 2011, a few Boys from 2nd KL attended the Selangor State Drill Competition, namely SGT Ethan, PTE Yixuan, PTE Terence and PTE Ka Hou. The accompanying officer was WO Darryn. We met at GMC at 7.15 a.m., had a quick uniform check and left church at around 7.30 a.m. to find our way to Subang Jaya.

Sgt Ethan was asked to be the commander for the Inspection and WO Darryn was invited to be one of the judges for the competition. There were a total of 10 teams participating - 3 from the Junior Section and 7 from the Senior Section. 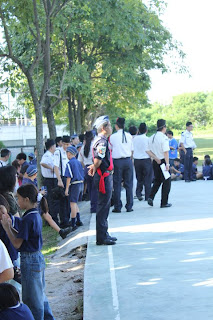 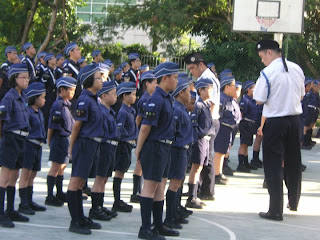 WO Darryn judging the Uniform Inspection. The other two judges for the day were Act.Captain Andy Tan (4th KL) and WO Jason Tham (1st KL).

Reported by:
WO Darryn

Posted by Chiew Kin Yan Darryn at 9:42 PM No comments:

[all pics will be uploaded and updated later]
Attendance was not very good today, with only 6 seniors and 4 juniors present. Opening parade was led by Mr. Matthew.

Today we had our 2nd Drill-Down Challenge. The Challenge Medal was won by PTE. Teng Hang Yew. 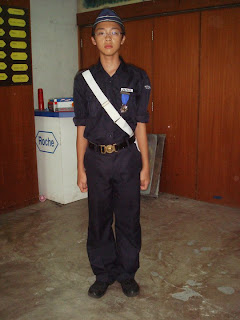 After that, there was a combined Drill session and then the seniors went for physical training led by SGT. Ethan, while the juniors played a tracking game led by Mr. Darryn.

After lunch, the juniors had some indoor games while seniors had their Target badge revision. This was followed by Christian education class led by Ms. Susie and Ms. Agnes.

Band was next - Buglers led by Mr. Joash and Drummers led by Mr. Matthew & SGT Ethan. The juniors were also encouraged to join the band but we couldn't find suitable instruments for them - drums and bells were too big & heavy, bugle was too difficult and they were not interested in flute.

Closing parade was held at 4.30p.m. Some boys stayed back for a youth program organized by the church.

Posted by Chiew Kin Yan Darryn at 8:11 PM No comments: 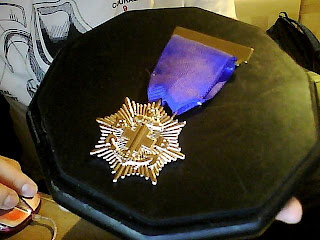 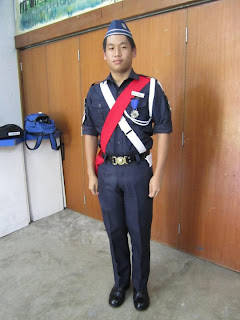 Congratulations to the winner of Round 1 of our Drill-down Challenge - SGT ETHAN!

The 2nd Kuala Lumpur Company Drill-down Challenge is held monthly. (on average, once in every 5 weeks) The rules are simple - respond to a wrong command, or do a drill move wrongly / out of timing and the Boy gets eliminated. Last man standing will win the posession of a magnificent medal hung on a blue ribbon - of which the Boy can proudly wear until the next round of the competition (a month later). The medal will then be passed on to the winner of the next round of the challenge. The medal was instituted in April 2011 as a measure to improve Drill standards and to make drilling fun for the Boys. In the absence of any special programs, the Drill-down challenge is usually the most eagerly anticipated activity for the month.
Posted by Chiew Kin Yan Darryn at 10:10 PM No comments:

Today, CPL Ethan and PTE Ezekiel taught the Boys a new song - La Bamba, which they had learnt from their participation in the KL State Band Concert last year. 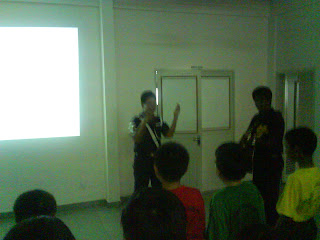 Another highlight of the day was the division of the company into Squads. Mr. Darryn divided the company into 3 Squads, which is Squad J, led by JR Tan Long Seng, Squad 1, led by PTE Ezekiel and Squad 2 let by CPL Ethan. 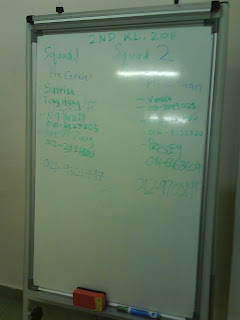 Reported by:
INS Darryn Chiew
Posted by Chiew Kin Yan Darryn at 1:53 AM No comments:

On 8th January 2011, 2nd Kuala Lumpur held their first meeting for the 2011 session.
For the first two weeks, it was decided that a slightly more informal approach would be taken.

After opening parade, the Boys moved into the main sanctuary.
Captain Cephas Yap led the entire company in a very dynamic session of praise and worship and then introduced the BB uniform system to the new recruits. After that, there were testimonies from some of the senior members. 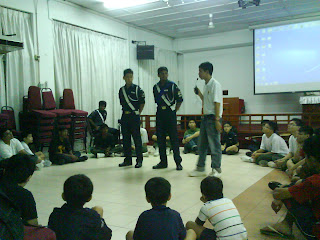 Then, Warrant Officer Nicholas from 12th KL did a brief introduction on the awards system of the BB. The Boys were quite interested in all the various awards available to them.

It was then time for sports, which everyone enjoyed, followed by closing parade.


During closing parade, two instructors were introduced - they are INS Matthew Yong and INS Darryn Chiew. After that, the Boys stayed back to clean up the church before leaving for home.

Reported by:
INS Darryn Chiew
Posted by Chiew Kin Yan Darryn at 1:31 AM No comments: 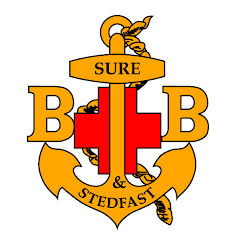